Juve U23 beat Padova to progress to Serie B play-offs!, thegutterpoet 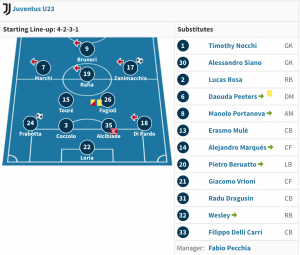 I had thought it was all over for the B team, and yet, it transpires that through winning the Serie C coppa italia, Pecchia’s troops qualified for the first round of the promotion playoffs. Curious to see Ronaldo turning out for our opponents!

Zanimachia, a EU4m signing from Genona last Summer who has been included with the seniors for a match day squad of late scored direct from a free kick from an acute angle with left back Frabrotta grabbing the second not long after to secure the victory with a smart drive from the edge of the 18 yard area.

A strong result against a solid Padova side, with most the second half played with ten men after Mr Beans aka Fagioli was sent off soon after the restart for his second rather rash challenge in rather quick succession!

The post Juve U23 beat Padova to progress to Serie B play-offs! appeared first on Juvefc.com.