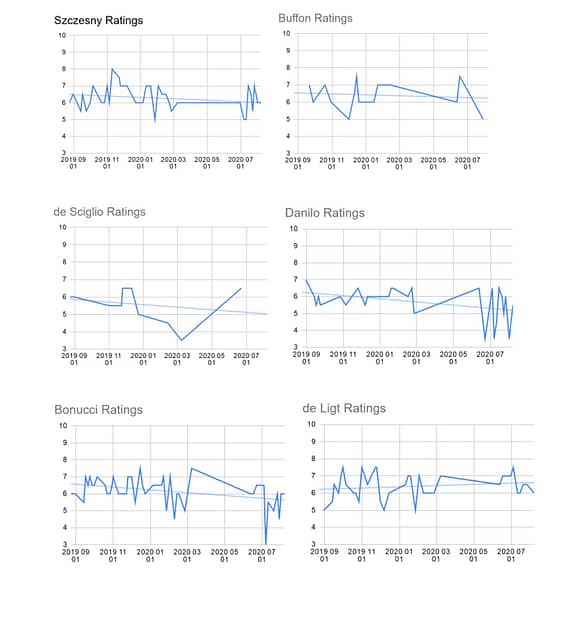 The following is a guest post from Mindaugas Jančis.

This highly scientific research aims to take a look at how JuveFC.com rated the players throughout the 2019/20 season. It also makes far-fetched conclusions from supplementary data, such as the number of games played and whether it was the Champions League or a local match. Chiellini, who sadly played only three games, hasn’t been included.

After counting individual player ratings throughout the season, I’ve decided to check how the team fared in each game and whether there’s a correlation between player performance and the win-draw-loss column.

Unsurprisingly, better play means better results. When the team average was 6.0 or higher, Juventus won 32 out of 33 games, September 17 Atletico match being the only draw.

There are no unworthy losses – every time the rating was 5.7 or lower.

Here are the average and median player ratings. Below 25% ratings are colored in red, 25–75% are in yellow, and above 75% are green.

There’s also a graph for each player’s ratings throughout the season that shows negative, neutral, or positive trendlines.

Both Dybala and Ronaldo are the best-rated players – the difference between 6.79 and 6.77 is negligible, their median scores are identical and better than any other player’s.

The worst players are Rugani and Khedira with 5.27 and 5.9 averages and 5.5 median rating. Only Bernardeschi and Can have the same 5.5 median.

Costa and Bonucci stand out with their median ratings of 6.5, which are higher than Szczęsny’s 6. This means that they had more above-average games than Szczęsny and technically should swap places with him.

Numbers can tell a story but a chart can do it better. Below are the charts with each player’s ratings throughout the season. The trendline shows whether things are going north, south, or nowhere in the long run.

The long flat line is the COVID-19 break. It’s interesting to see how some players scored before and after the break, while some were virtually unfazed.

Again, any rating that’s less than 6 is below the team’s average. When 10 out of 22 players, including one of your Top 2, are on a visible decline throughout the season, fighting for trophies can become a daunting task. Some were going up but crashed after the coronavirus break, others couldn’t climb back from the hole no matter what.

We won’t be including Demiral, Khedira, and Can because they haven’t played much and thus didn’t have a chance to show signs of improvement, stability, or the lack of both.

De Ligt has shown the biggest improvement since the start of the season.

Rugani has shown the biggest anti-improvement throughout the season.

Juventus player has played 30 games on average in the 2019/20 season. That’s 58% of the total games (52) played by the team. When counting the total games played,
Bernardeschi is Mr Average.

Good players can have bad games and vice versa. But which ones had the most? In this article, a bad game is anything below 6 rating and a good game is 7 or more.

As you can see, Higuain is featured in both tables, meaning that he tends to either steal the show or disappear in a shadow, the latter, sadly, happening more often. But which players have the best and the worst difference between the good and the bad games?

Dybala and De Ligt had few bad and many good games

Bernardeschi and Danilo had many bad and few good games

Bonucci, Demiral, and Costa had almost the same amount of good and bad games We’ve been comparing the total numbers so far and that makes a difference when Bonucci has played 47 games (the most in Juventus) and Costa appeared in only 22 (not to mention that some were late game substitutions). Let’s see if anything changes if we count the % of good and bad games.

De Sciglio, Can, Khedira, Rugani, and Bernardeschi had many bad and few or none good games

Khedira, Rugani, and Bernardeschi are three player with the majority of their games ranked below 6 After switching to the percentages, Dybala and Ronaldo switch places, making the former Juventus’ best performing player. Buffon moves up to the 3rd place and Bonucci no longer makes the cut.

While Szczęsny seems to fare worse percentage-wise, one mustn’t forget that he’s played 7 out of 8 Champions League games (more on the league comparison later). Juventus lost only one game out of Buffon’s 15, so it’s natural for him to get a better rating.

It’s one thing to earn a good rating playing against SPAL and another to shine in an away game against Atletico Madrid. That’s why we’ll be checking which players are at their best when it matters most. Of course, 8 games is a small sample size and many players appeared only in a few Champions League games, while others didn’t play at all. Therefore, we’ll be noting just the significant differences in ratings of those who appeared in at least 3 games.

Dybala, De Ligt, and Ronaldo are the only players in the Top 25% of Champions League and Italy.

Cuadrado, Szczęsny, Sandro, and Pjanic are average in all games The average team rating is virtually the same when comparing the Champions League and Italian matches (Serie A, Coppa Italia, Supercoppa), which means that Juventus shows up with the same composure in every game.

Finally, the time has come to see which players shift in another gear on the international scene and which ones succumb to the pressure and end up substituted.

Much to my surprise, Bernardeschi turned out to have the biggest positive rating difference. While his four caps in Champions League are still below average (5.88), it’s still much better than his third-worst 5.29 rating in Italy games.

The other two players who have shown a significant improvement in Champions League games are Dybala and Matuidi (!). The latter was average in Champions League and poor in the domestic tournaments, so that’s not much better than Bernardeschi’s result.

And to my biggest surprise, Ronaldo has fizzled when it matters most. The difference between his Italy and Champions League performances is second only to Rabiot, who is average in Italy and below average in Europe. Ronaldo is the only player that plays above average in all leagues but still plays significantly worse in the Champions League.

Just like Rabiot, the other two, Bentancur, and Ramsey, are average in Italy and below average in Europe.